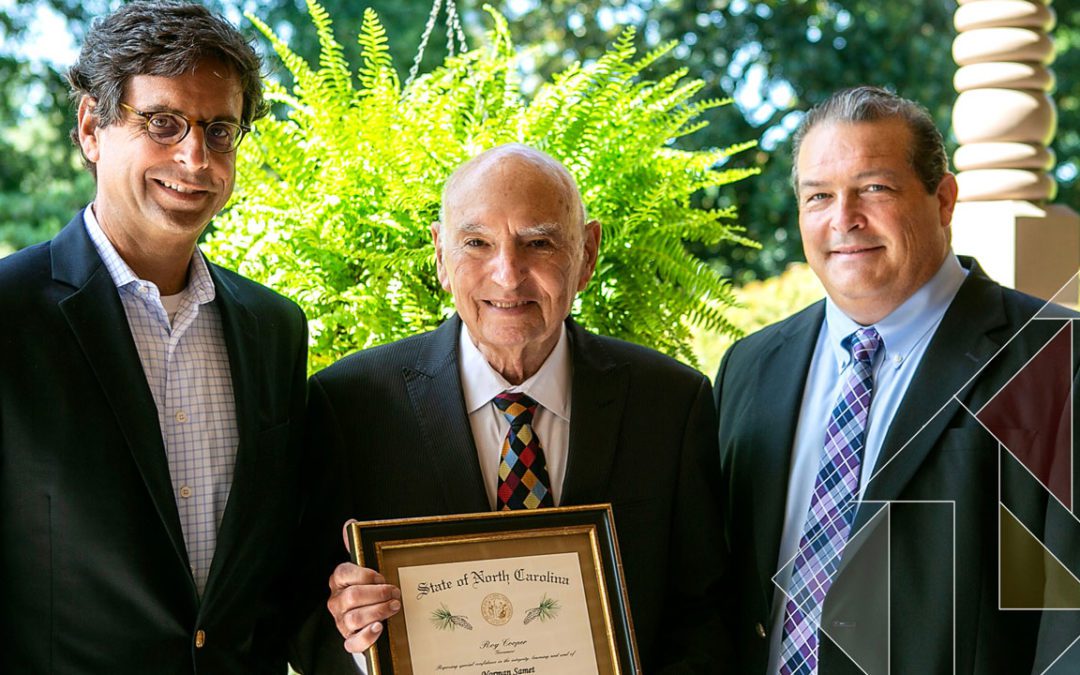 In honor of the exemplary service that has made significant impact on North Carolina and local communities, Norman G. Samet, founder of Samet Corporation, has been awarded The Order of the Long Leaf Pine, one of the highest civilian honors granted by the Office of the Governor.

N.C. Gov. Roy Cooper presented the award to Samet Friday, Aug 27, during a ceremony at the Executive Mansion.

Samet Corporation is a full-service general contractor and real estate development firm founded by Norman Samet in 1961 in High Point, NC. Samet led the company as CEO until September 2000 and continues to serve on the board as Chair Emeritus.

A High Point native, Samet is the epitome of a home-grown success story. What started as one location in the Triad flourished to locations in Raleigh, Charlotte, Wilmington, Charleston, and Savannah.

Samet has contributed countless hours to the region and state by serving with over 15 professional and civic organizations working to make education, health care, housing, and the arts more accessible to every North Carolinian. In 2020 he was honored with the Outstanding Philanthropist award, presented by the Greensboro Association of Fundraising Professionals.

“Mr. Samet is a pillar in the philanthropic and business community of North Carolina, and his decades of hard work have proven him to be the ideal recipient of this award,” said Congresswoman Kathy Manning (NC-06), who penned a letter of nomination for this award.

2021 marked Samet Corporations 60th anniversary, and to commemorate the day and Norman Samet’s legacy of giving back, Samet associates volunteered over 800 hours of community service in just 60 days across its six regional offices.

“Norman Samet is quietly generous with his gifts, and he demonstrates a community-focused, pay-it-forward spirit that helps improve the lives of North Carolinians,” said The Honorable Jim Hunt, former Governor of North Carolina. “As his company has grown, so has Samet’s generosity. I can think of no better way to celebrate and honor 60 years of service than to award him the Order of the Long Leaf Pine.”

Since 1963, North Carolina’s governors have reserved their highest honor, The Order of the Long Leaf Pine award, for persons who have made significant contributions to the state and their communities through their exemplary service and exceptional accomplishments. Persons named to The Order become North Carolina “Ambassadors” with their names and award dates recorded on a roster maintained by The Order of the Long Leaf Pine Society.